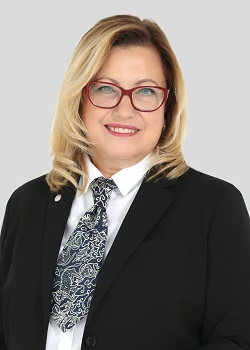 From 2003 to 2012: partner and director of the Law Firm Land, Novosibirsk, acknowledged leader of the legal market in Siberia at that time (according to ratings).

Since 2012: created her own Law Firm LexProf with a focus on major projects not only in the region, but on a federal scale.

In 2018, managing partner Tatyana Goncharova once again confirmed the highest personal rating (band I) assigned to her earlier by the experts of the international rating of Chambers & Partners law firms in the field of general business law services General Business Law - Russia Regions - Tatiana Goncharova.

Clients point out that Tatiana is among the best regional litigators and note a special talent in developing strategies and tactics of protection.

The most successful projects in various branches of law:

Customs law – T. Goncharova represented a company with foreign capital in a dispute with the customs authority on bringing the Company to reponsibility for violating the rules for export of temporarily imported goods (equipment imported to Russia in accordance with the investment conditions when privatizing shares). The fine was $800,000. The development of a legal position, taking into account the correct choice of judicial tactics, made it possible to achieve a decision on release of the Company from administrative penalty.

Law of exchange – the first meeting of the Supreme Commercial Court of the Russian Federation held under the chairmanship of A. Ivanov on the application submitted by T. Goncharova (at that time –T. Shilina). The judicial acts of three instances were canceled, the case was sent for a new trial and the final judicial act was made in favor of the principal Goncharova. Thus, an illegal court decision was overruled. According to this decision, a large transaction of the company on acquisition of promissory notes previously issued by the company from 3 different legal entities on the open market was declared invalid. The main violation was highlighted in the supervisory appeal - the court simply added up 3 transactions with different persons and considered it as a major transaction, based on the sum of all transactions.

Currency control – As part of protection of the rights of a company with foreign participation a precedent decision on the termination of enforcement proceedings initiated on the basis of an order of the currency control authority which collected a fine in the full amount of the loan received by the company from its non-resident participant was made on the claim of T. Goncharova, and it was not overturned in all higher instances. This was the first decision in the Siberian region that overcame the ambiguity of the law on currency regulation, which allowed to recover amounts that were not returned abroad from the companies in all cases. Loans of non-resident participants were excluded from this general provision by judicial practice.